I have tried every conceivable recipe that guarantees crispy crackling. They all lie! I have failed too many times to count. This is the ONLY one that works the way I want it to. The best crispy crackling guaranteed.

I have searched high and low for the perfect pork belly recipe. I have tried every conceivable recipe that guarantees crispy crackling every time. Unfortunately I have been disappointed many times. In order to save you all a lot of time and even more money, I have done all the hard work for you! What you will find here is a recipe that I have created, combining a few techniques into a fool proof crispy crackling recipe.

The rise of the pig began in Asia and progressed through the Near East, and eventually to Europe, where Sus scrofa domesticus really took off. It is to Spain that the Americas owe the introduction of this valuable animal, as the first pigs on the continent were brought with Columbus on his second voyage.

The Spanish explorers brought pigs with them to eat on their long expeditions, and left many of them in the New World, where no large domesticated animals existed. Hernando de Soto, who explored what is today the southeastern United States, is often called the father of the American pork industry, as he brought 200 of them on his expedition. Those that remained are the ancestors of most of the pigs in the country, and certainly related to the feral pigs, or wild boar, that roam the country. 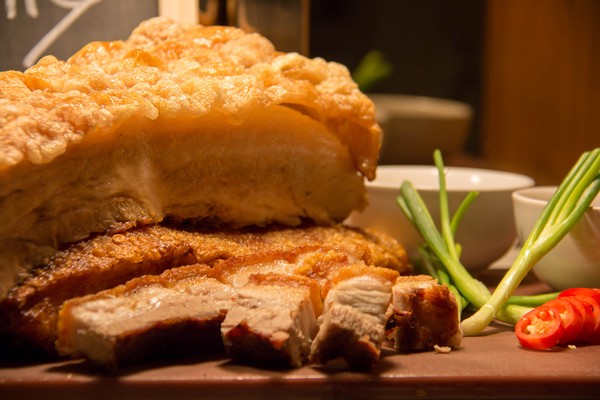 The secret to the crackling is to (1) score the rind quite finely, (2) ensure the rind is free of moisture, and (3) don't cover or baste the pork rind at any time whie it is cooking in the oven.

You will get excellent result if you follow the cooking temperatures - it is important that your oven is at the right temperature.