Cottage pie is pretty great, if you ask me. It’s toasty, savoury, and totally melt-in-your-mouth tasty. Even though it can be enjoyed any time of year, feasting on it during the cold weather is the perfect time.

Cottage pie or shepherd's pie is a type of savory pie. It is made with minced meat, with mashed potato on top. It comes from the United Kingdom and Ireland. The dish is now popular worldwide.

The name "cottage pie" was first used at the end of the 18th century. It was around that time that the poorer people of Britain, people who lived in cottages in the country, started using potatoes as an everyday food. Originally, a pie made with any kind of meat and mashed potato was called a "cottage pie".

According to the Oxford Companion to Food, once upon a time, Scotland made its shepherd’s pies with pastry instead of mashed potatoes.

The United Kingdom, made up of England, Scotland, Wales and Northern Ireland, is an island nation in northwestern Europe. England – birthplace of Shakespeare and The Beatles – is home to the capital, London, a globally influential centre of finance and culture. England is also site of Neolithic Stonehenge, Bath’s Roman spa and centuries-old universities at Oxford and Cambridge. 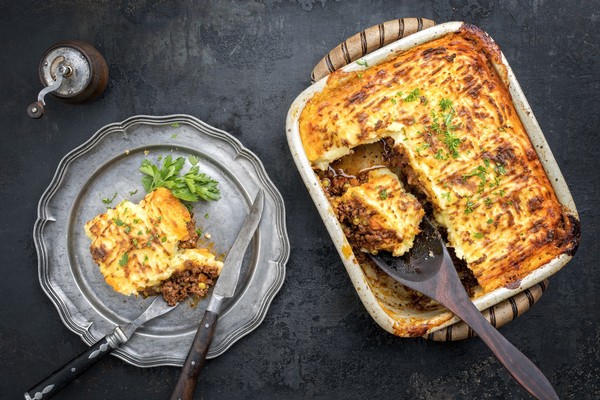