If you think of Spain, you think of Jamon, Tapas, Paella and of course, Chorizo! This cured pork sausage is world famous and rightfully so. It's full of flavor and a staple food in my house. Marthinus Strydom

Spanish chorizo is known for its rich red colour and tangy, smoky flavour, equally delicious eaten in slices as tapas or used in cooking to give wonderful depth to a bean stew or egg dish. Chorizo in its present form has only been enjoyed in Spain for the last few centuries, as its main flavouring spice, pimentón, or smoked Spanish paprika, was introduced to Spain in the sixteenth century from the Americas by the explorers and conquistadors.

Where should I hang my sausages?

I find the very best place is in the guest shower. It has the perfect humidity and out of direct sunlight. You can cure in the basement. Just make sure you hang the sausages away from any odors. It's for this reason that I don't like using the garage. The smell of gasoline, oil or diesel will permeate the sausage and spoil it.

Ihere is a simple rule. White mould is ok, anything else is bad. If you do get mould, don't panick. Take a tablespoon of vinegar witha tablespoon of water and wipe the sausages to get rig of the mould. If it's black or green mould, then rather dump the sausages. Too risky keeping them.

When is my dry cured homemade Spanish chorizo ready?

After it has lost around 35% of its initial weight, it should be safe to eat. That’s why it’s a good idea to weight your chorizo before hanging it up to dry. I like mine in the later, dryer stages, so I rarely weigh it anymore. I check on the chorizo by squeezing it, waiting for it to feel firm to the touch before cutting into it. 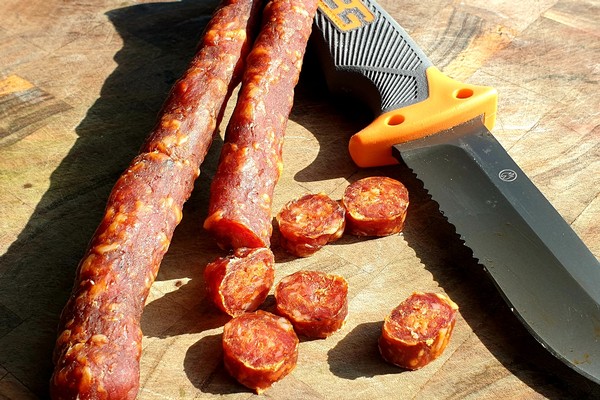 If you do the stuffing yourself