It’s the kind of thing that just makes things feel like a special occasion. All those light, flaky layers, and that rich buttery flavor!

Puff pastry is a delicate, light, and flaky pastry that can be used in countless different ways. You might also know it by its French name: pâte feuilletée.

Like pie crust, biscuits, and danish, puff pastry is meant to be tender, buttery, and flaky. And the most important thing to keep in mind when making these kinds of pastries is to keep them nice and cold at all times!

Butter is layered within the dough, creating hundreds of flaky layers. This process is called “lamination.” When the cold butter goes into a hot oven, steam is released, causing all those layers to separate and the pastry to puff up sky high!

Puff Pastry was invented in about 1645 by a French pastrycook's apprentice named Claudius Gele. At the end of his apprenticeship, Claudius wanted to bake a delicious loaf of bread for his sick father, who was prescribed a diet consisting of water, flour and butter. Claudius prepared a dough, packing the butter into it, kneading the dough out on the table, folding it, and repeating the procedure ten times, after which he moulded the dough into a loaf.

The pastrycook, who had watched the procedure, advised Claudius against baking the loaf as he thought the butter would run out of it. Nevertheless, the loaf was put in the oven, and as the loaf baked, both the pastrycook and Claudius were more and more surprised at the shape and the unusual size it attained.

Having finished his apprenticeship, Claudius left for Paris, where he found work at the Rosabau Patisserie. Here he completed his invention, which won the shop an enormous fortune and name. Claudius later went to Florence, where he worked in the Brothers Mosca's pastry shop. The brothers Mosca reaped the honour of having invented the Puff Pastry, although Claudius kept his secret to himself and always prepared his pastries in a locked room. Claudius died in 1682, a highly regarded artist. 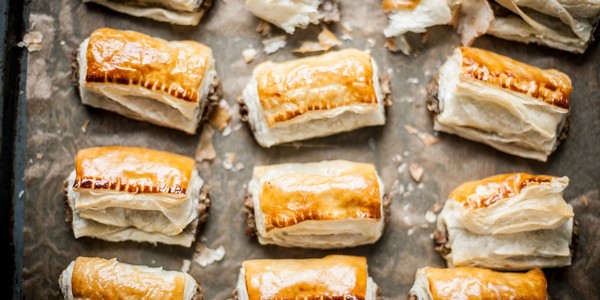